This post is going to be more photos than words.. Mykonos is just so beautiful and photos are much better than my ramblings.  We left Piraeus and took the Ferry to Mykonos early morning around 7am.

We stayed at Aeolos Hotel Mykonos > If anyone wants an amazing resort only minutes from the city with the most amazing hospitality from the owners. Book here! Make sure you book early on as they get booked out fast. The owners Panos and his family are simply amazing. You come as strangers and leave as family.

They picked us up from Port and had all our bags taken care of. #winning

We stayed on the island for 5 days so we had plenty of time to party, sun bake and see the sights.
Mykonos did not disappoint.

The first afternoon we basically dropped our stuff at the resort and took the walk to the mykonos city to get some food - I don't know if it was just us and we took the wrong pathway but my god there was 101 stairs to get down into the city. Not to mention it was nearly 30 degrees. - I realized how unfit i was. Ugh
All I wanted to do after lunch was sun bake by the pool at the resort so that's what we did. 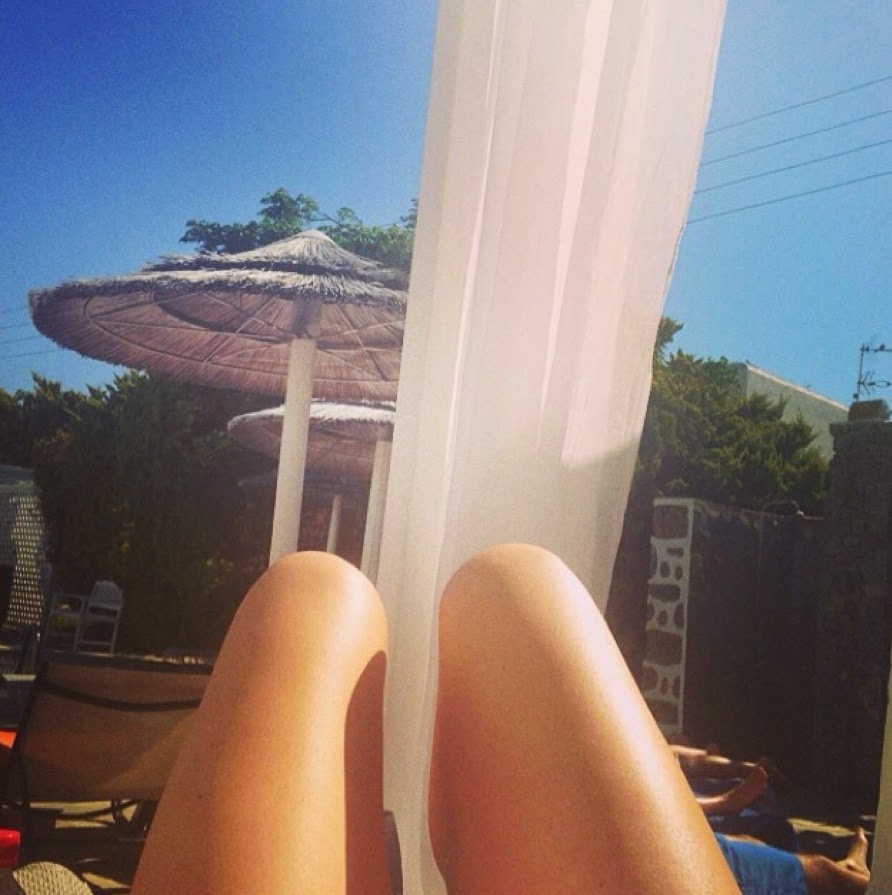 Our first night we decided to hang out at the resort with some others we had met (and the boys wanted to watch the world cup - Of course, the time we go travelling the world cup has to be on and the main priority for those two was getting to somewhere that had a tv lol!) 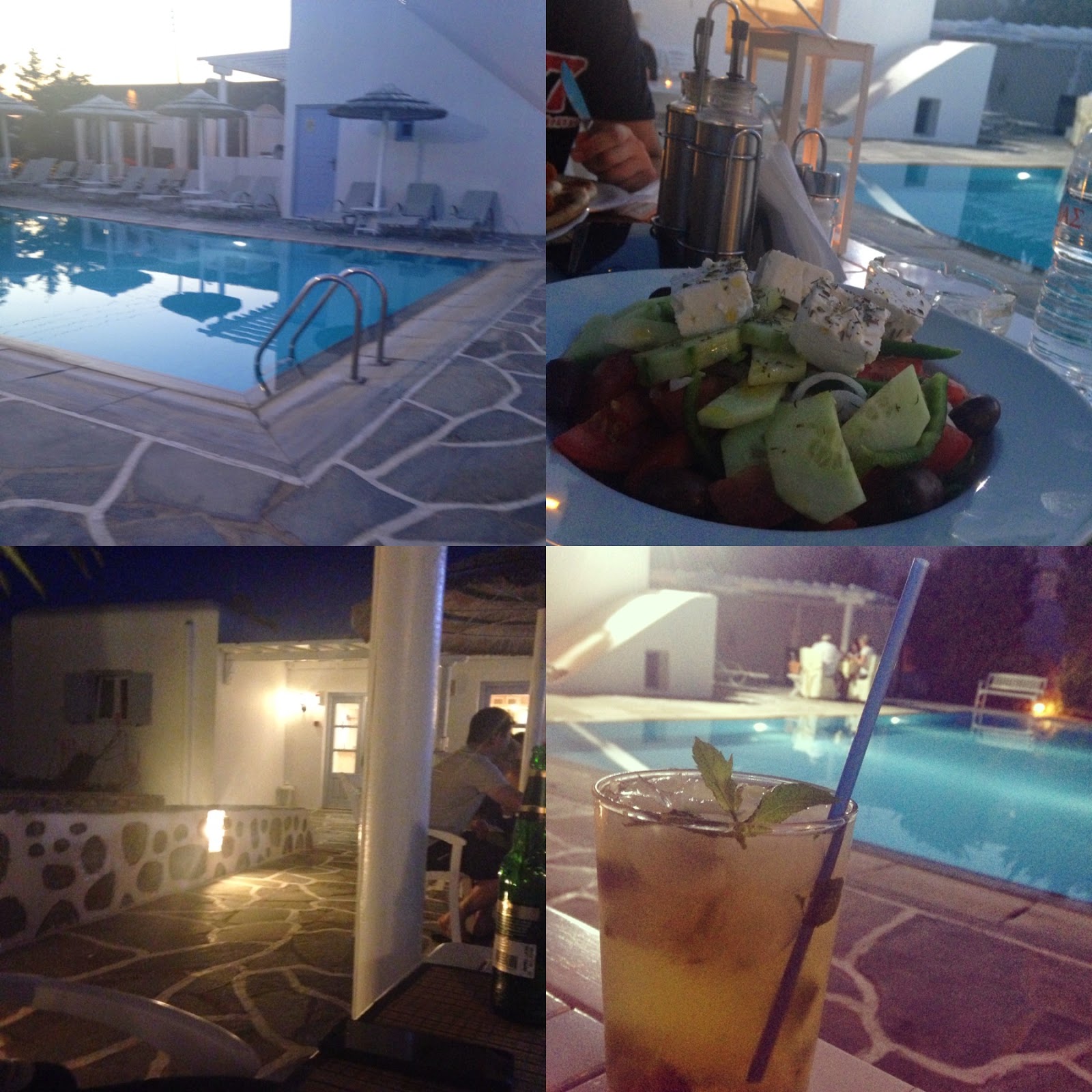 The next morning  we had the choice to hire a car or scooter - We went with the car we only planned to have it for 2 days anyway.  This little while car rolls into the driveway and I had to laugh. It was super cute. 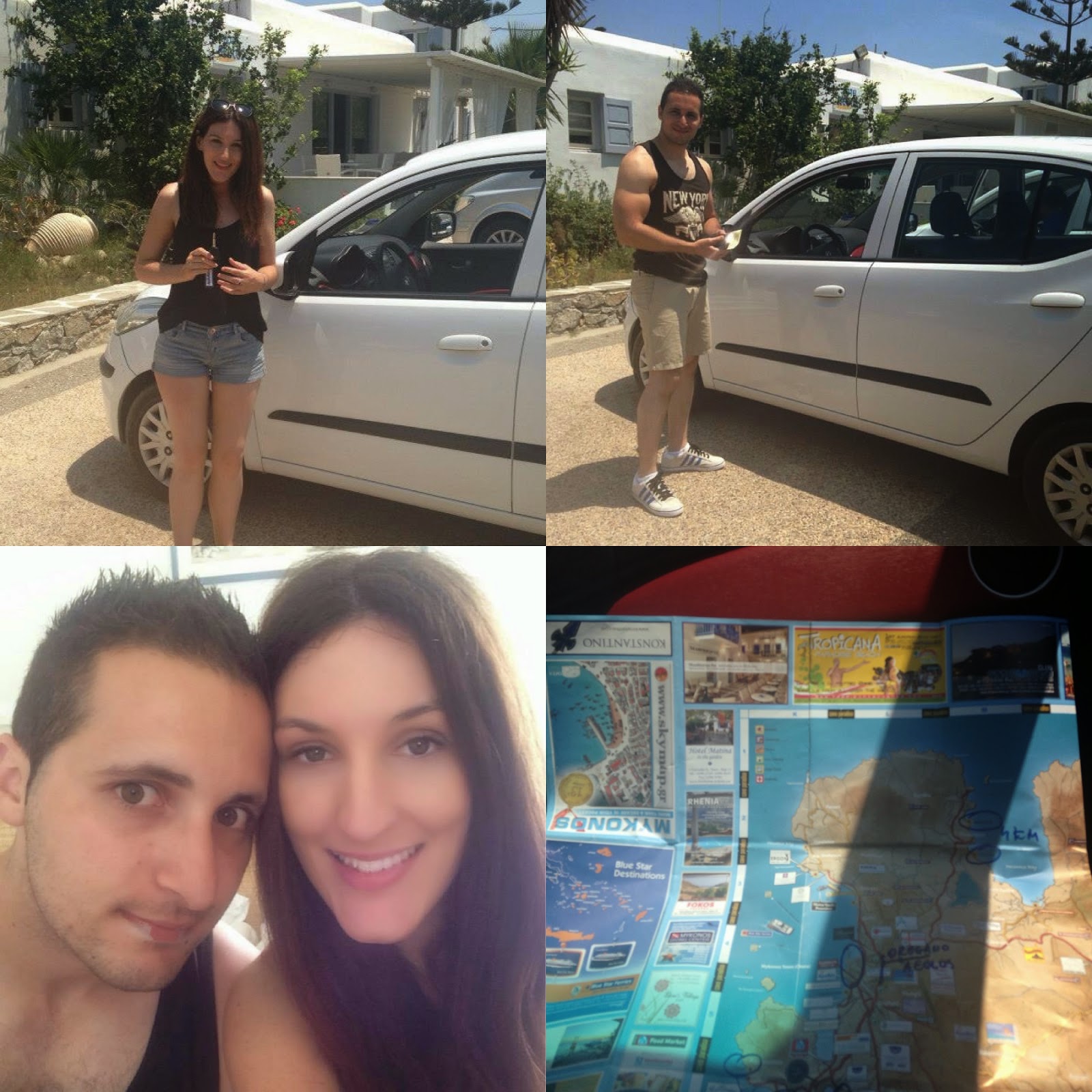 We started at one of the end island and drove. I'll admit the Boyfriend did most (all) of the driving as he felt I cant drive the best back home, let alone on the opposite side of the road and in a manual car in a foreign country. I thought that was for the best too. Some of the roads in Mykonos are so narrow! We came nose to nose with a bus on, what I could consider a one way street. End result: We ended up reversing all the way back up the street so the bus could get through.
Bus: 1 - Us: 0

We stopped at Thalassa Beach Bar - Which is near Kalafatis beach.
Perfect view for lunch. 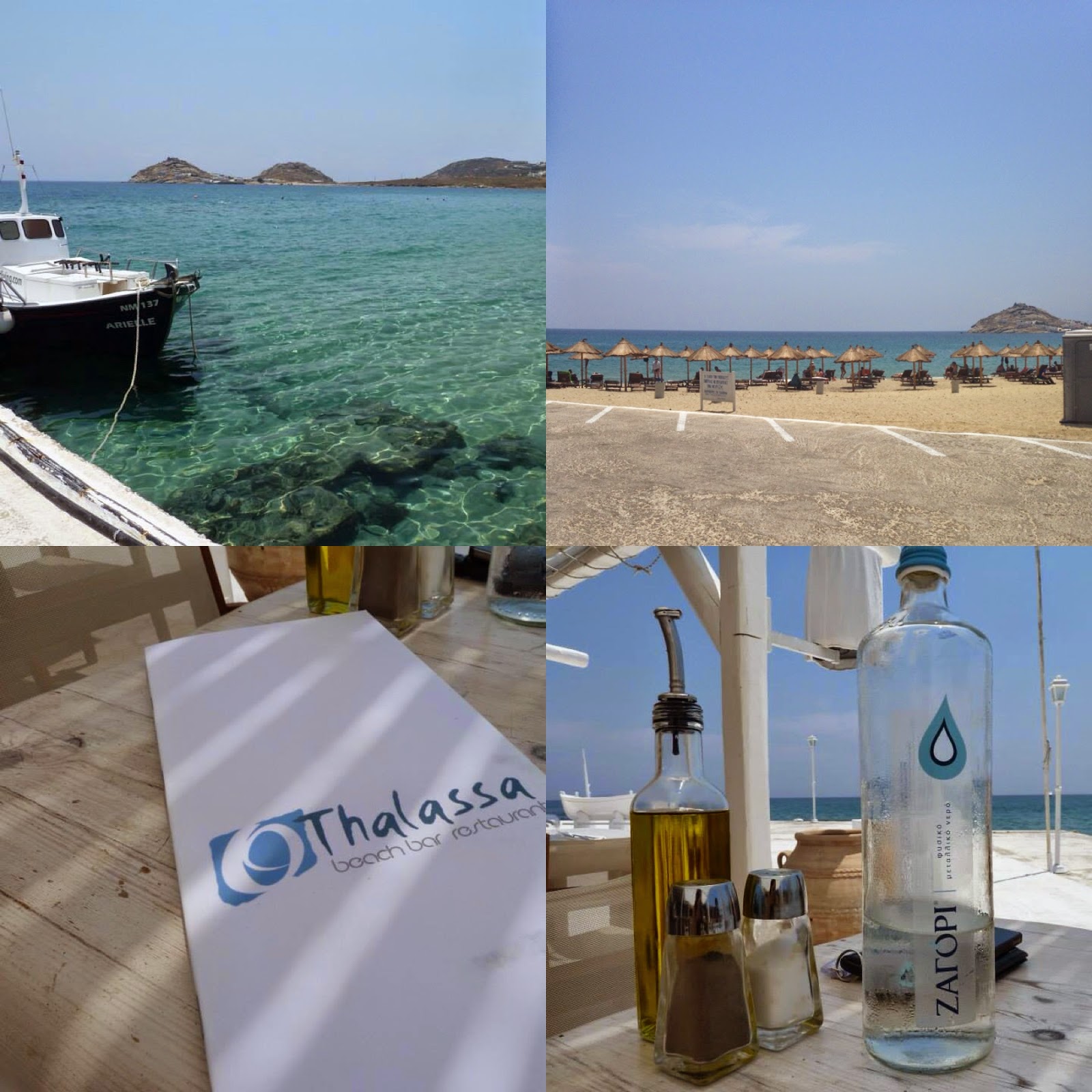 The food and drinks where pretty expensive but tasted amazing!
I went with the chicken salad and I was surprised with the amount of meat that was in it. 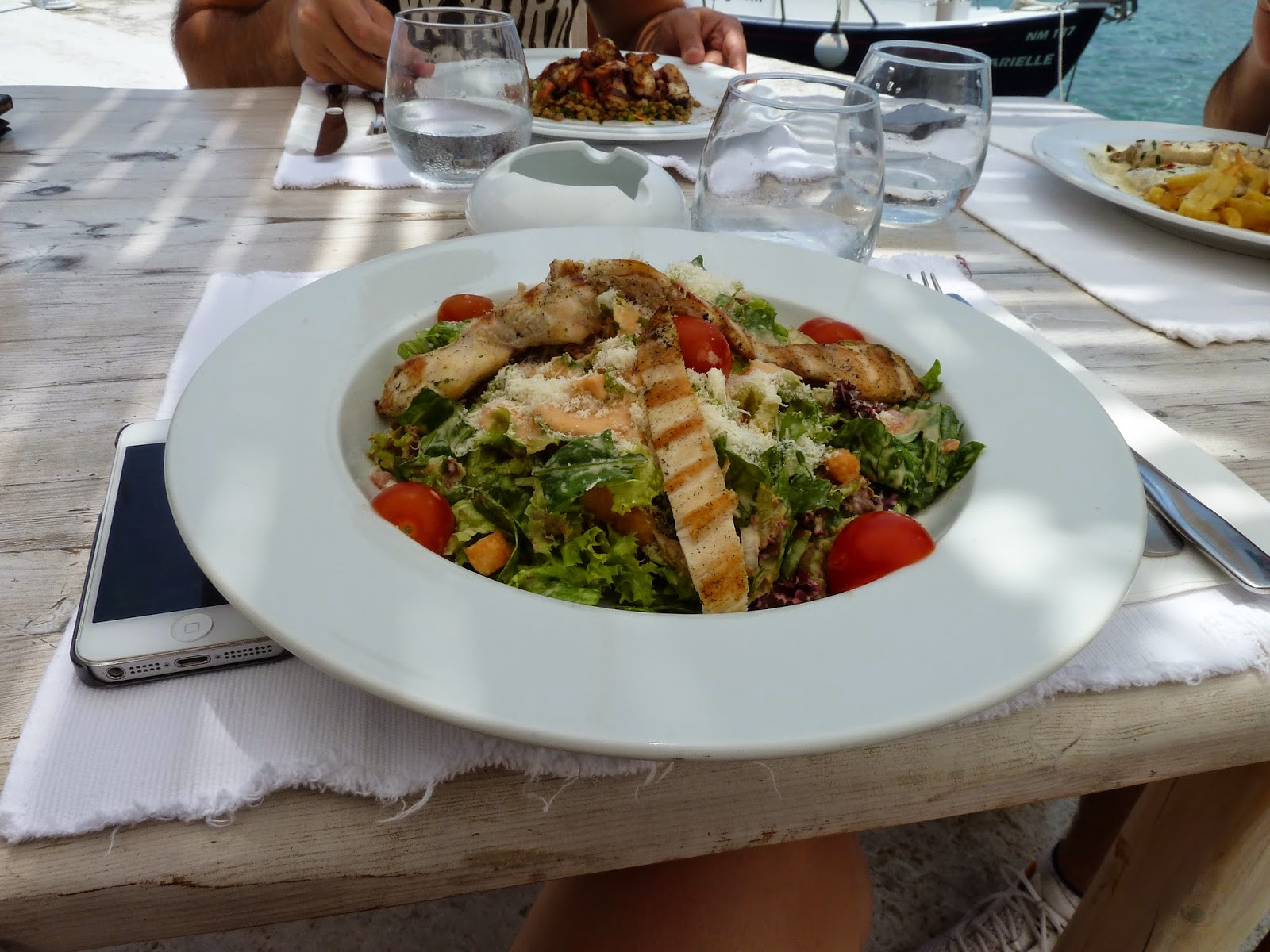 After a massive day of exploring and driving around, we hit up the pool again 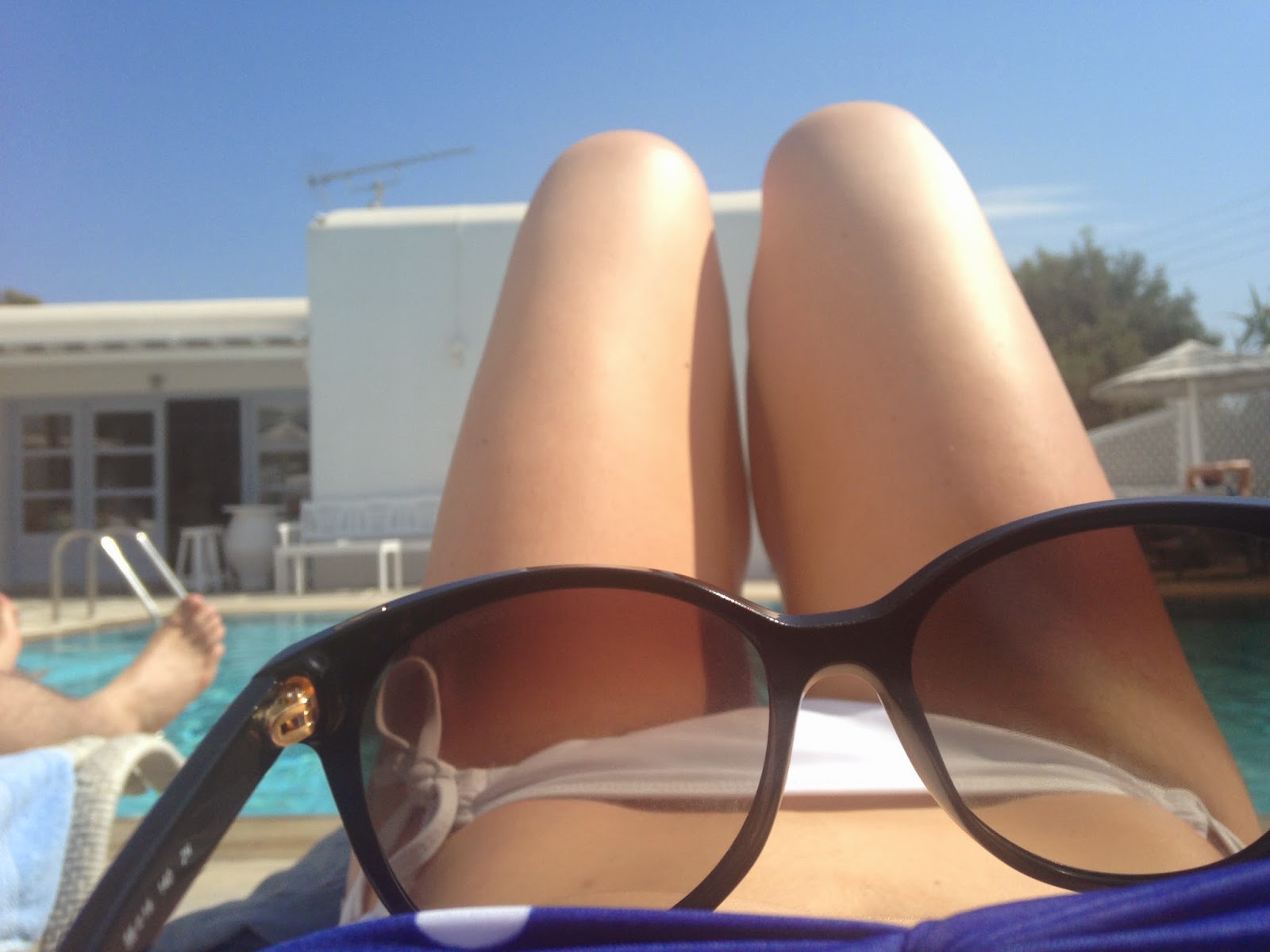 The nightlife on the Island is next level. I'm just going to say this and hopefully no one reading this gets offended.. Mykonos is full of Gays (Men especially!) I could tell you so many stories of incidents that we had with the Boyf and his little brother being mistaken for being a couple, and I being the sister or friend.
Some of the guys staying at the resort - had a few cracks at the boyfriend. I thought it was rather funny. 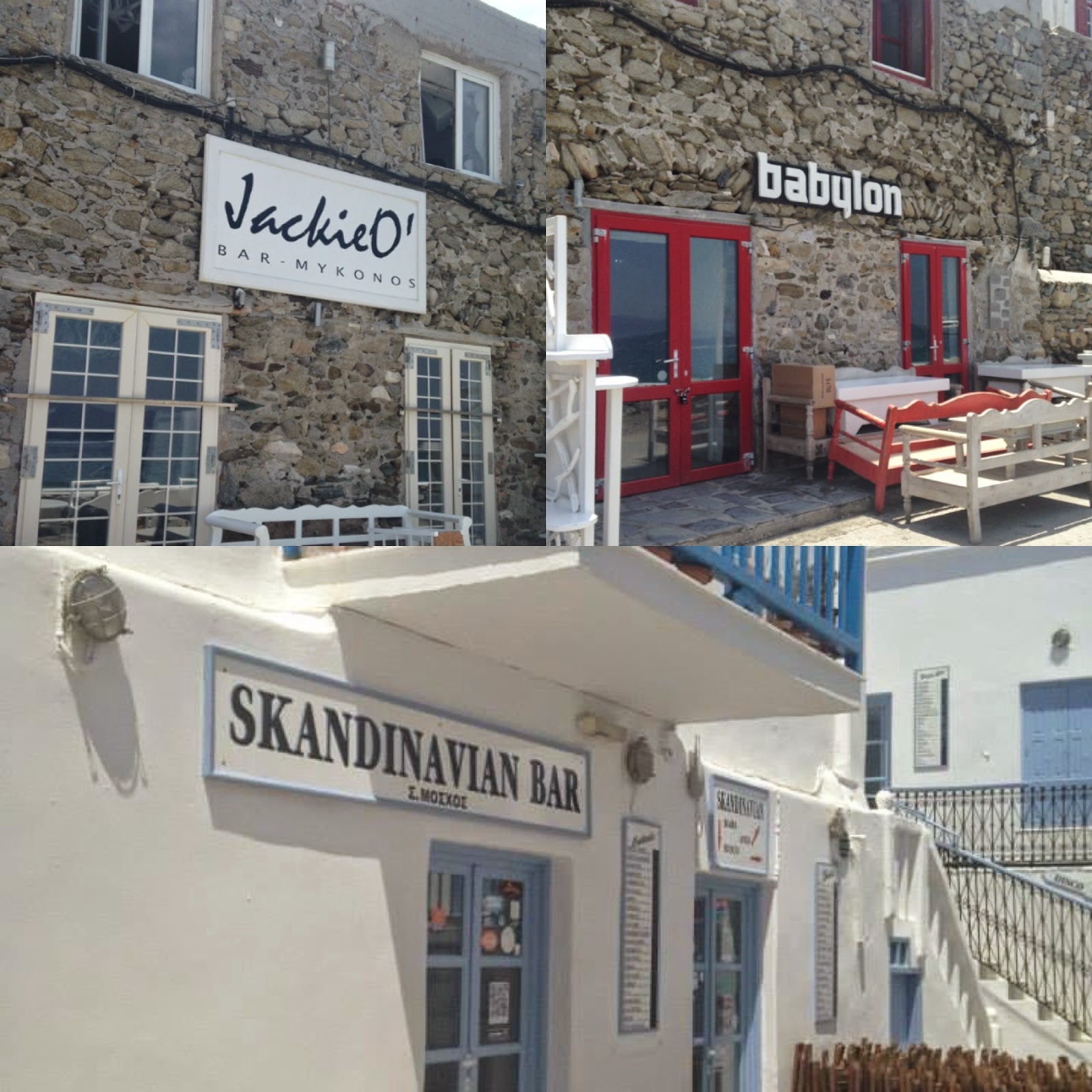 One thing that I loved about Mykonos was the streets. They were all paved and traditional. We spent alot of time in Mykonos city down near little Venice and the water. 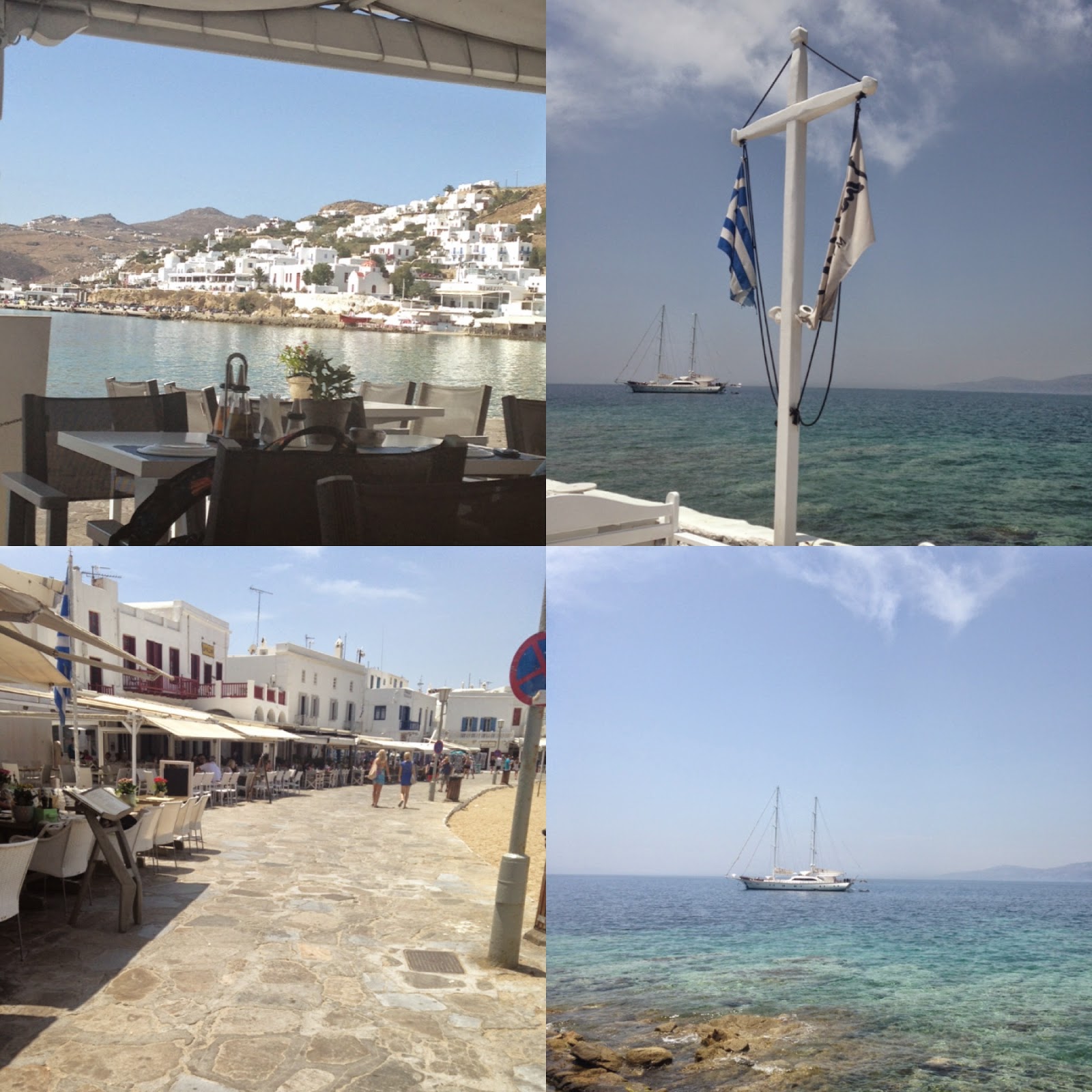 I'd never been somewhere just so damn pretty.
Everywhere you turned - photo opportunity. The food, The People - Spot on. 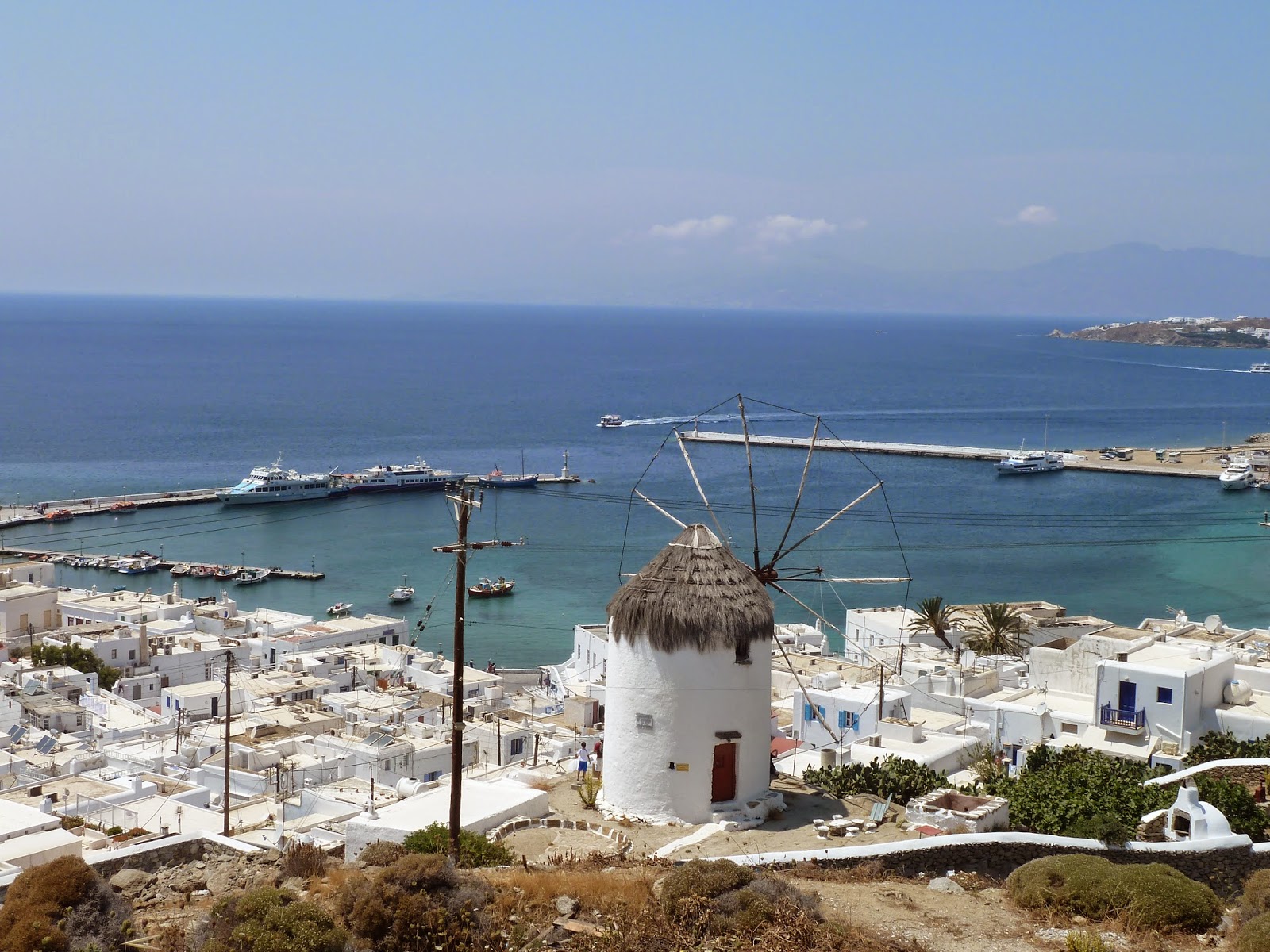 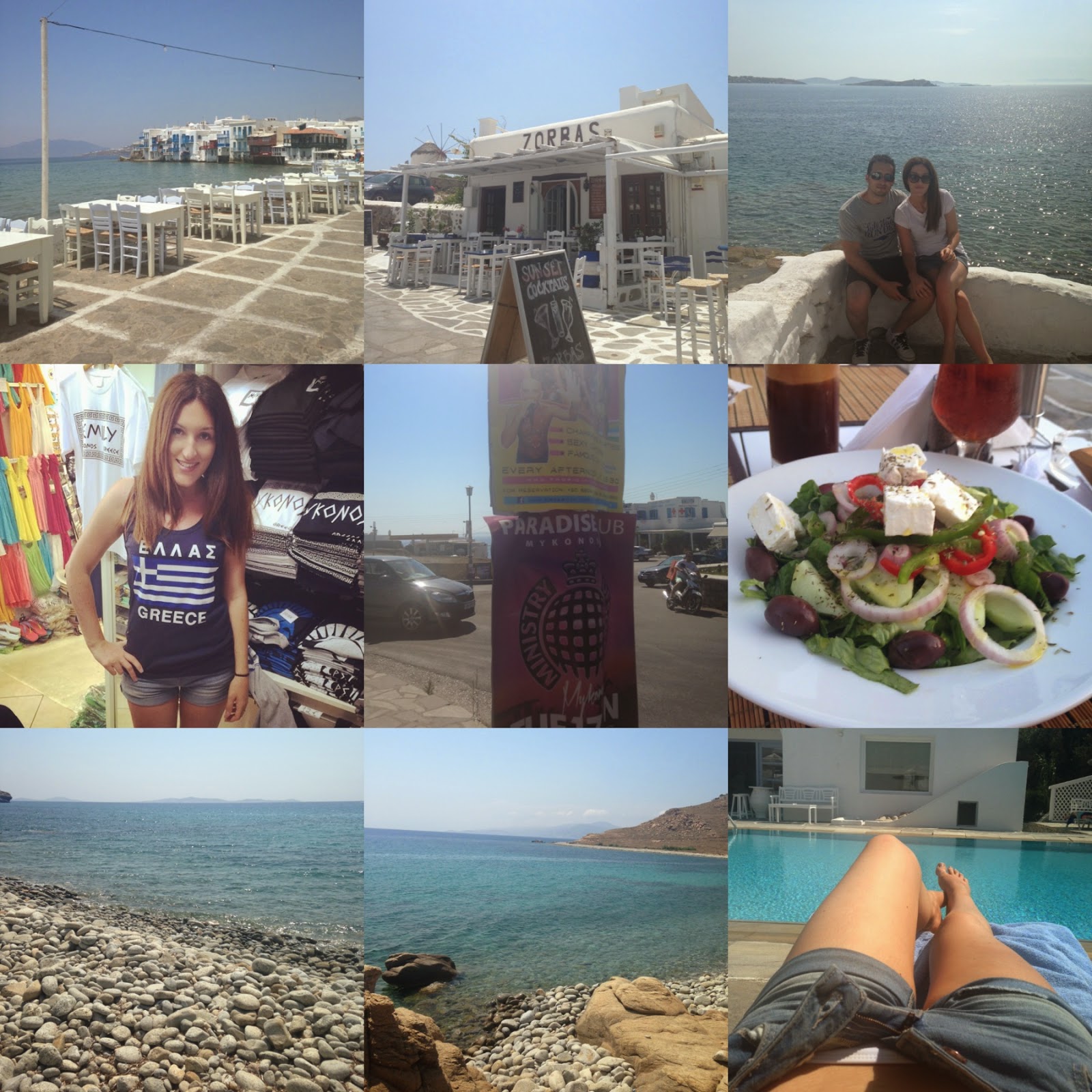 One of my favorite places was Elia Beach - We spent our last full day here getting black and laying on beach beds eating and drinking. 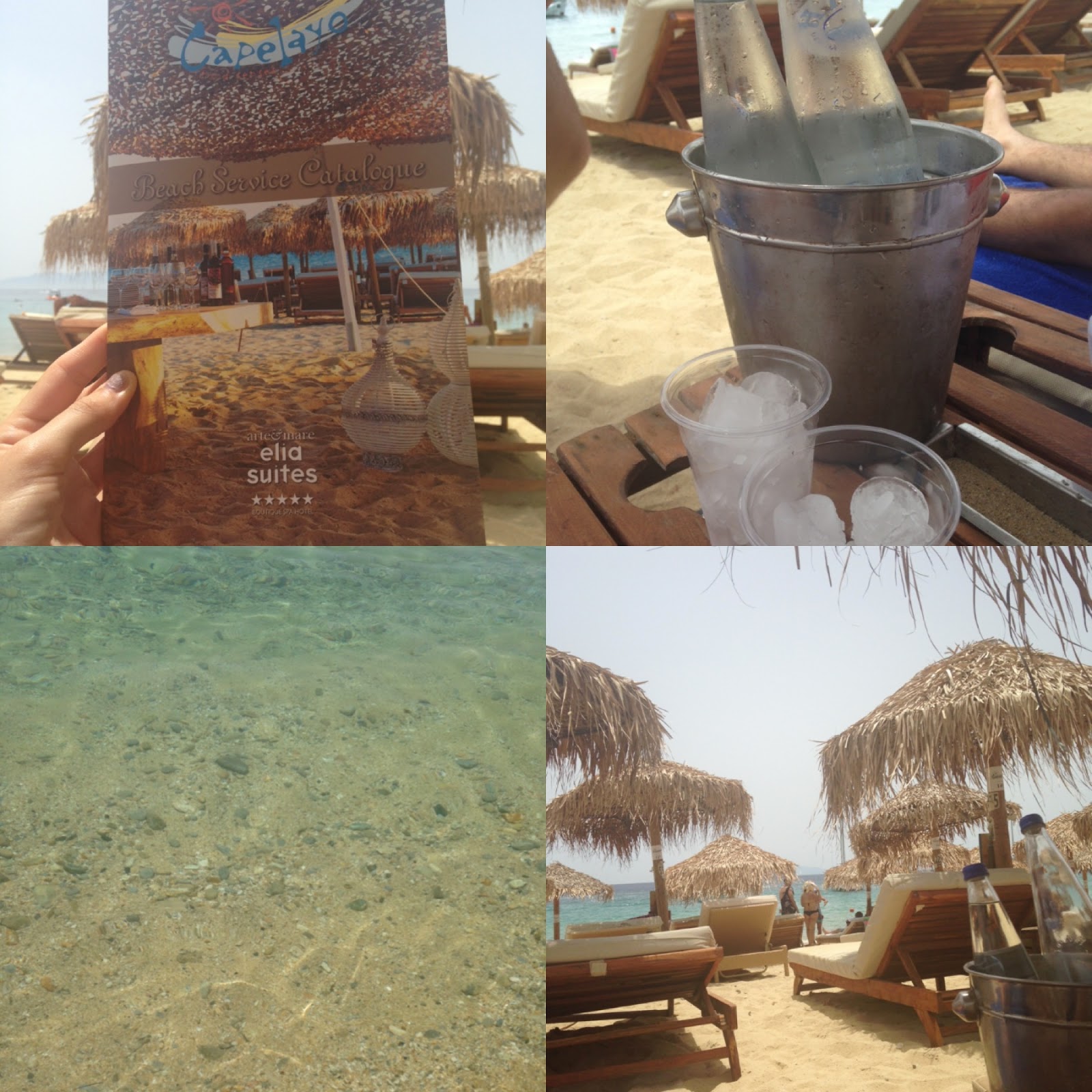 The one thing I'll remember about Mykonos was the beaches, by far they had the best beaches that it'd ever seen and the water was perfect for swimming. 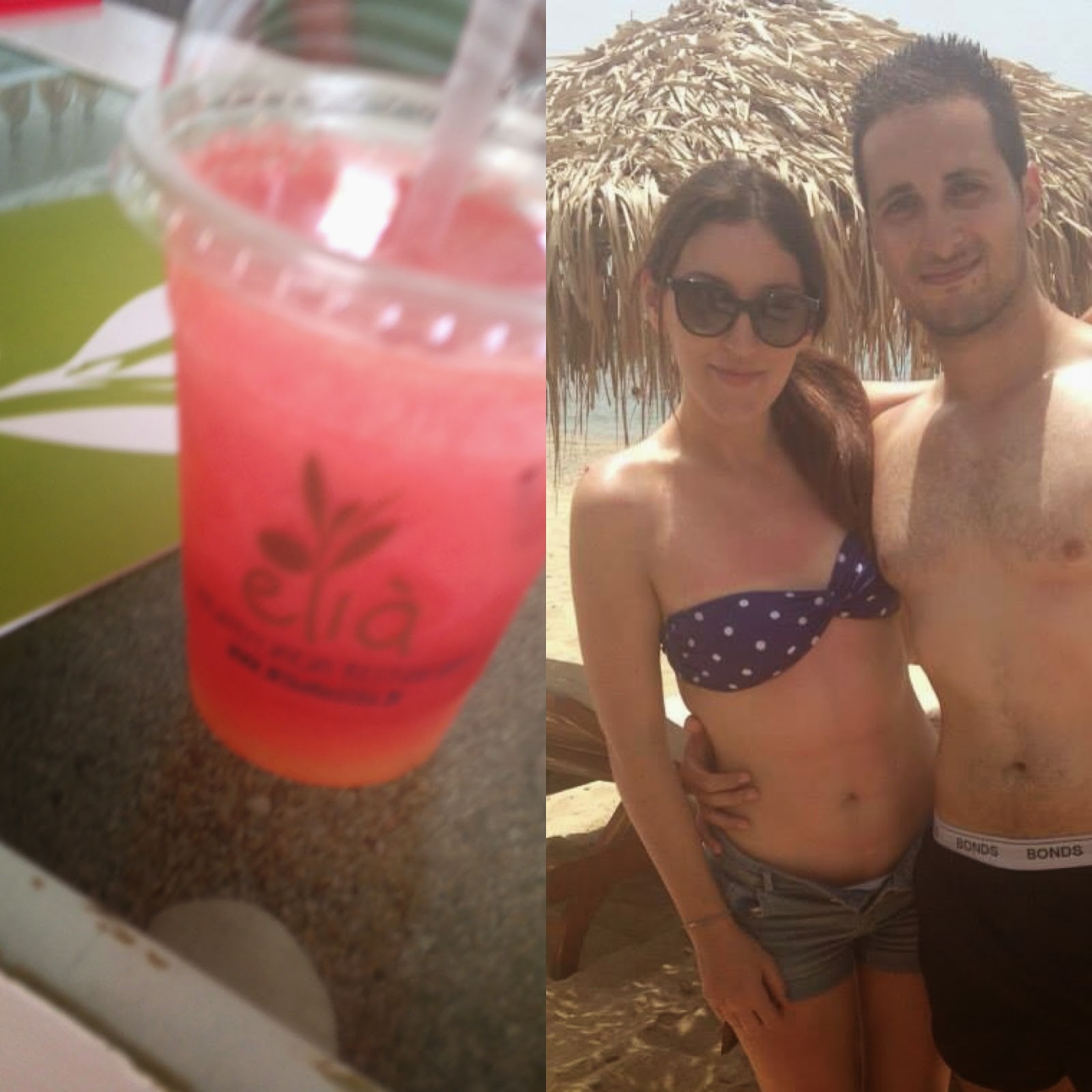 The perfect way to end the best 5 days on the island.

Next stop > Santorini.
Posted by That Brunette One at 10:39 PM